Somehow I saw the old school tootsie roll commercial again, and something about it stood out.
Yes there was still that asshole owl that ate the kid's candy, but there were other things. A random kid walking around in the woods talking to cows, foxes, turtles and owl? What mushrooms was he licking before he decided to talk to these animals? And why the hell isn't he wearing any clothes? And why is the fox wearing sunglasses? And if the owl is a professor why is he still wearing his hat from graduation?
Seems to me that somewhere along the way, the kid decided to take bath salts and offer "animals" his "tootsie pop", he got turned down quite a few times, until he found that old professor. Yes, he was very willing to help him with his licking problem. Smart owls know when an opportunity is staring them in the eye. 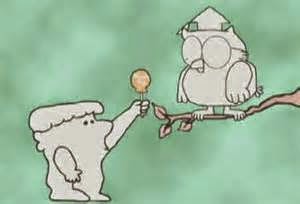 Posted by Rob Gilchrist at 1:36 PM No comments: